Tenton Hammer has an interesting series of interviews with Jermy Gaffneys of Carbine Studios about their upcoming stylish MMORPG Hit Wildstar. He goes into detail about how they reward a player for playing good and gives an excellent example how the layer system works in the starting zone.

Jeremy Gaffneys talks about how they log everything players are doing. The looked at the paths players took and where they were moving along in order to find out where they need to place content, make it more obvious or even obscure the easy to find ones a bit. It is part of the reason they went public witht he game now. Carbine needs more testers and feared despite the NDA it would leak at some point and decided to go public now. 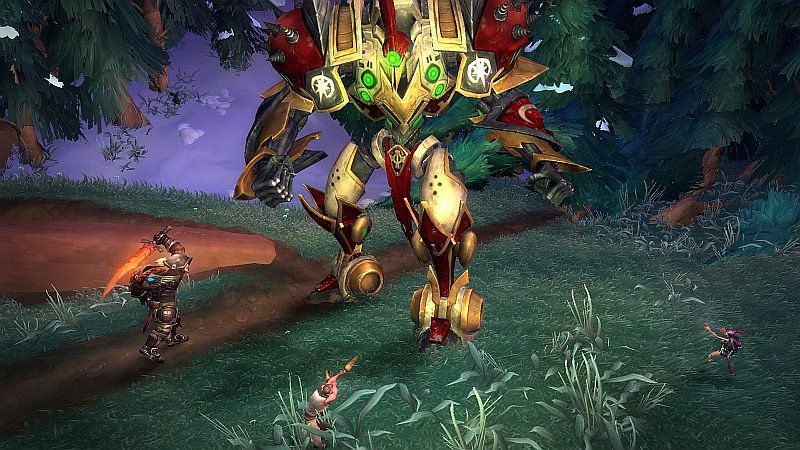 The 3 phases in combat are: recognize, react and reward. Showing players what is happening and then give them a bunch of ways to solve that.

„You’ll see a red indicator around the mob, so what do you do about it? You can dodge out of it; you can double tap and dodge. You can knock it over, stun it, use crowd control, you can use high cooldown abilities to kill it faster. Then we give you a reward for it. There are different kinds of rewards. If you can dodge it successfully, it gets vulnerable so you can kill it faster and it’ll take more damage. Also, we give you xp rewards for this“ – Jeremy Gaffneys at Tenton Hammer

These rewards will increase when you fight multiple enemies at the same time. They want to start simple for the beginner MMO Player and increase complexity for the advanced player with their layer system that will provide challenges for the hardcore gamer.

As we know the layer system is not only used to provide more hardcore content, but there are also layers that have to do with the paths you choose. As you know there are currently 4 paths in the game. At character creation you choose your path, basically a preferred playstyle and you get additional content based on that. Until I played the game myself I cannot really judge how well that all plays, in fac tI fear it might be somewhat limited. I like to kill stuff, I like to explore and also lore … but there is no Dr Rambo Jones, don’t know what I would chose if I had to. I’d always think about missing content …

But well, there is an excellent example on how these layers look in an actual zone ingame at onrpg.com.

An ordinary MMORPG would asky ou to kill a few lions and then you’d proceed to the next step. You can do the same in Wildstar, but lets take a look what might happen if you do not run off right away. If you continue to slay lions, you may become a hero of the town close by or the leader of the lions would challenge you into a battle, with great rewards at hand.

As scientist you may notice that some lions have been acting strange and realize that they have been mutated and there is a bigger threat around the city and find the cause for the spreading of poison. The citizens of the town will celebrate your vistory.

But then in the field there is also a massive tree that only the bravest of men would dare to climb. As an explorer if you do so you will gain even more rewards (both tangible and just feeling special about yourself). Explore even more and you might find a hidden dungeon cave only available 4 hours a day! Or a scientist being eaten by a dinosaur that can share valuable items and quests should you rescue him in a given time limit.- onrpg.com

*Sigh*, which path would you chose?