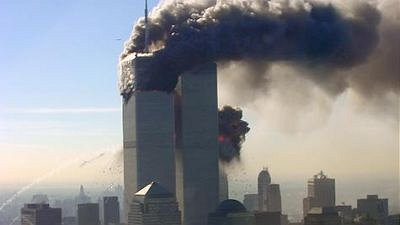 10 years ago, it was an afternoon at the office … not too much to do and I was browsing the mystics.de forum. We were posting about game stuff, when someone posted that a plane hit the World Trade Center. I recall being amused at first … not about the incident, but about the fact that a pilot could actuall hit such a big obstacle by mistake.

While I had the picture of a little white cessna with red stripes in mind that hung at the side of the tower with noone hurt, just scared like hell everyone tried to find out what happened. But every news page was unreachable, like totally unreachable, the sites in the US same as german or european sites.

While this was a first sign that this was not an ordinary incident, we still tried to find out what happened. Then another post appeared that another plane crashed into the second tower. This was a striking moment for me, suddenly it became crystal clear that this wasn’t an accident.

Meanwhile I was able to find a text only news page that wasn’t down and read about the 2 full size civil passenger planes that crashed into the building and slowly pictures started to spread on various sites. I recall how shocking that was.

We went into the cafeteria and looked at the TV, many people where standing around it, all silent and a traumatized look on their face. We saw people waving with windows above the actual crash and some dots falling down. When the camera zoomed it you realized that it wasn’t just debris, but people jumping out of the windows. This was another striking moment … How scared do you have to be to jump like that into certain death? I don’t think anyone can imagine this … the silence remained.

Then we saw the first tower fall … At this moment I recalled that 50000 people + visitors worked inside the towers and I wondered how many made it out and what happened to the people that stood around the building, the helpers, etc … and this huge wall of dust, debris and worse crawled through the streets. We were called back to work at that time but there was no thought about actually doing something else but getting more information on what was going on. I went back to my office when I heard that the second tower collapsed.

At this day I left work early and watched the coverage all night. Being quite emphatic, one reason I try to get close to anybody, it was quite tough to watch it, especially the amateur videos, etc … The horror, shock and grief in the faces is something I will not forget. Even today brings these feelings come back.

The USA weren’t really a country that was liked at the time. The arrogance was frowned upon and there was quite some antipathy until 9/11 took place. For all harm that was caused, it made people move together and to feel with the USA.

What did you do today 10 years ago? How did you feel?