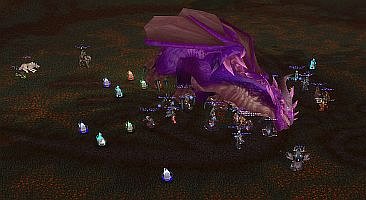 You know the drill, Treebearman did it again. Halion, the last boss of the Ruby Sanctum, has been defeated in relatively short learning phase by our sweet power pug.
People seemed to have a hard time showing up for further progression raids after our Lich King 25 heroic kill, but we got Halion down anyhow.

Really did not expect a kill today already, after the trouble we had with people showing up for loot day only and finding excuses for the progress raids 😀 Ofc we had some decent tries anyhow, but nothing where you could say:“It’s a kill soon!“

We had 2 silly deaths and a 700k hp wipe to enrage after only a few tries but it gave us the confidence we needed for the kill. A Paladin – lol not me! – decided to jump into twilight cutter. Lols combat ressed him and he went back down just in time.

You can take a look at the (upstairs only) log here, sucks when you have to stop dps all the time 😀

On a sidenote, noone important died 😀 haha

Sorry, could not resist that one! Let us hear a song about your sacrifice tomorrow! 😀