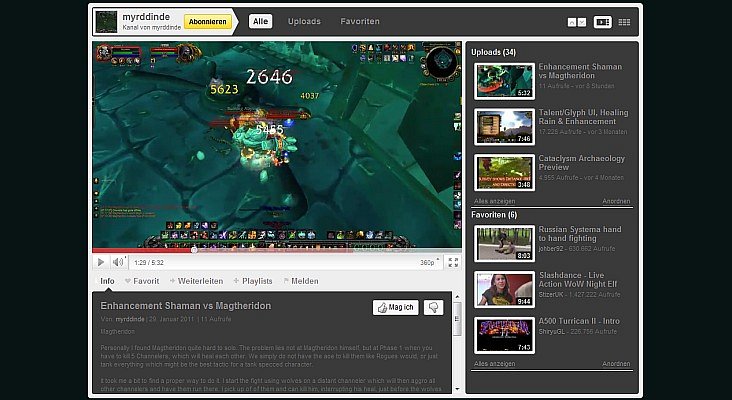 Last week I posted about soloable Bosses for Enhancement Shamans and I spend the last week Frapsing a bit and making a nice Intro for the Videos. Not quite 100% happy with that, yet – but it is getting there.

Anyway you can find all my videos here: http://www.youtube.com/user/myrddinde

Personally I found Magtheridon quite hard to solo. The problem lies not at Magtheridon himself, but at Phase 1 when you have to kill 5 Channelers, which will heal each other. We simply do not have the aoe to kill them like Rogues would, or just tank everything which might be the best tactic for a tank specced character.

It took me a bit to find a proper way to do it. I start the fight using wolves on a distant channeler which will then aggro all other channelers and have them run there. I pick up of of them and can kill him, interrupting his heal, just before the wolves run out/die. Then I pop earth elemental and pick up another Channeler and pull him away and kill him.

By then a lot of Infernals spawned (they despawn after a while, just ignore them) and you need to manage the remaining channelers somehow — which is the tricky party. Don’t forget searing totem for large lava lashes, to slice through the self healing threshhold, since the channelers will no longer be separated it is nearly impossible to interrupt them all at once.

Don’t forget your defensive cooldwons and self healing. The shear amount of mobs can drain even large health pools fast. I like to use the Agility scrolls from inscription as Battle Elixir and the Prismatic Elixir (90 Resistance) and Healing Stream Totem Glyph to avoid most damage coming from Infernals / Shadow Bolt Novas.

Magtheridon himself is no problem, blastwave hits for less than his melee hits, so there is no reason to interrupt it. Try not to stand in falling debris or fire