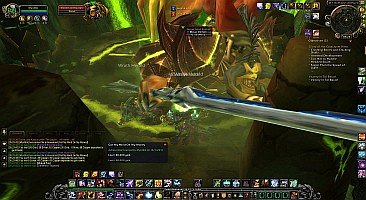 2 weeks ago I posted about Doomwalker and Doomlord Kazzak as for an Enhancement Shaman soloable Raid/World Bosses. I frapsed both encounters for you.

This World Boss spawns in Hellfire Peninsula and has 2 mechanics that can make the fight rather tricky for us.

This means you can’t just drain your mana mindless and that you need to get rid of  Twisted Reflection asap. It is a magical effect, which means we can’t easily dispell it each time it is applied. The Glyph of Shamanistic Rage, which will remove 1 magical debuff is a good choice here and Restorative Potion, which can be prepotted. Alternatively you may pop earth elemental and have your wolves use twin howl to avoid you being hit and thus kazzak getting healed.

This World boss in Shadowmoon Valley is probably the easiest to kill. He only does some damage, knockbacks and occasionally kills your totems.

These are the only somewhat tricky abilities. Reduced Armor and Frenzy on top can lead to 10-12k Melee hits. Crush Armor can be Dodged and parried. It usually refreshes 4-5 seconds before running out and timing your earth elemental or spirit wolves twin howl you can easily reset stacks this way. Personally I save heroism and wolves for the enrage phase and pop it around 25% just before frenzy activates.