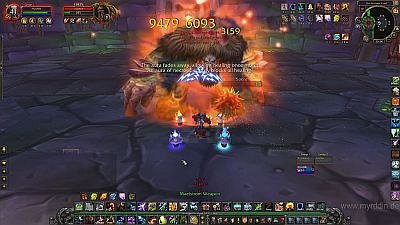 Soloing the Plaguewing in Naxxramas (level 80 raid instance) was another idea by one of my readers. Actually I thought Anub’Arak would have been the easier kill, but he appeared pretty tough and I kind of stopped trying Naxx at all witht eh experience at hand. But it turned out to be quite easy.

The Plaguewing is one of 5 wings inside the level 80 raid Instance Naxxramas and harbours 3 Bosses, Noth the Plaguebringer, Heigan the Unclean and Loatheb. The most famous one is probably Heigan with erupting poison waves in his room, that require precise movement, the Heigan Dance! The videos all show first kills, so the tactic at the start of each fight isn’t perfect, read below for some tips!

Let’s start with Noth, as he is the first encounter in the Plague Quarter. From time to time he spawns some adds, throws some curses, cripples your attack speed and teleports to the balcony to spawn more adds. As you can see I haven’t been there in a while and the fraps was my first attempt. As shaman make sure to dispell the curse and kill adds asap, you can save shamanistic rage – glyphed – to remove the cripple as it will hamper gaining MSW stacks. Should have thought about that before rushing in like a cowboy 😀

It appears Noth the Plaguebringer drops a good 170ish gold and 2 epics.

Back in wotlk, the Unclean was my weekly reminder to brush my teeth and take a shower, but what he was really famous for is erupting poison over the room. The eruptions follow a pattern, the Heigan Dance. Fortunately you do not have to pay attention too much about it solo. In raids you put the casters on the platform and have melee dance across the room. Heigan casts a 300% casting speed debuff which made this tactic kind of necessary. But since you are always melee with him and get the debuff all the time you can basically stay on the platform all the time until p2 begins, then you need to do the dance.

Loatheb is the last boss inside the Plague Quarter. He has a nasty ability, blocking all healing for like 15 seconds, then giving you a few seconds only to heal up. Every few sec he will spawn a spore which causes you to do 0 threat, don’t take it too fast or he might kill your totems, and at the same time the spore will increase your critical strike chance by like 50%. Backpeddling on spore spawn might make it possible to have your wolves get the buff aswell. Other than that it is pretty simple, Heigan doesn’t hit hard and you might want to save Maelstrom Weapon Procs for the fading of the healing block.