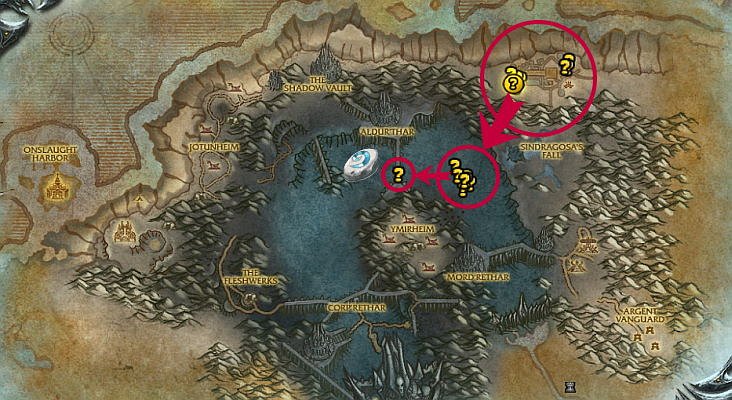 If you plan to  get to Level 85 as fast as possible you will most likely want to stock up quests to turn in. Once the XP gain is activated on December 7th you will be able to have a nice bunch of xp waiting for you.

These selected quests will bring you roughly 35%-40% into Level 80 with minimal travel time.

In a Dev Chat Blizzard confirmed that they haven’t restricted quests in the past 2 expansions and will not do so now either. Here is the original text:

Q: Will you allow players to fill their quest log with say, 25 dailies, and then turn them in right after Midnight on December 7th to get a quick boost towards 85? This is how it worked in the beta, but some players are confused on whether it will work on Live. Thanks!
A: Regarding 25 daily quests to turn in when the expansion goes live, this is something players have been able to do for the last 2 expansions and we aren’t talking about changing it now.

There are no restrictions and this leaves us some room to maximize the gain. Ideally we’d select 25 Quests and are close by to be able to turn them in fast. There are quite a few quests hubs that are suitable for this. Some Quests give 16k xp, some 22k xp, and a few 27k xp.

There are a couple of tricks though that we can use to our advantage. If you simply look for 25 daily quests you’d select Sons of Hodir, Skybreaker(or Horde equivalent) and Argent Tournament. This works well, but can still be improved.

If you look at the quest „Among the Champions“ from Argent Tournament you will see that the „Mark of the Champion“ aren’t classified as quest items. Abandoning the quest will leave the items in your inventory and you will be able to cash it in at once.

As you can see I have also chosen „Putting the Hertz: The Valley of Lost Hope“ which is only 15 sec flight time away from the Skybreaker but gives 27500 xp as reward. 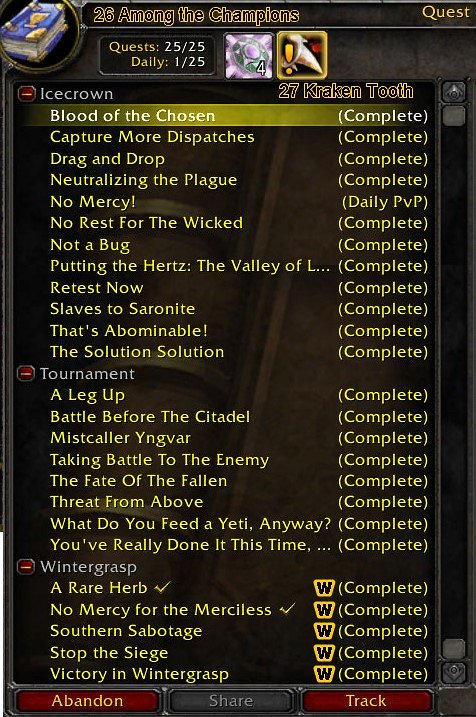 for a total of = 585400 xp. If you happen to have a Kraken Tooth (they have been removed) you can turn that one in aswell.

This will also have a nice effect towards guild advancement and leveling. The more people in your guild will do this the faster it you may reach the Guild Perk „Fast Track“ (for an additional xp Boost).

Btw, if you are on EU-Ravencrest and are an experienced Tank with preorder/digital purchase we are still looking for some help with assembling an instance farming group to 85.