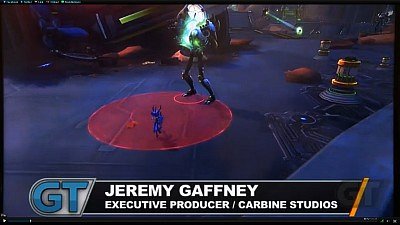 Finally some exclusive footage from Wildstar at gamescom 2012 made it to gametrailers. Jeremy Gaffney gives us an excellent walkthrough of combat, environment, new zones. There are tons of new pieces and bits, inclusive the estimated start of the Wildstar Beta!

Eldan, a race that dominated the Galaxy has disappeared and left this world (Nexus) behind with everything wildly out of control. Magic and Technology ae going wrong.

The blue crystal here is Loftite and is infused with magic, ripping up pieces of land out f the ground. You have to figure out why and how this is happening. It does not only affect the ground, but also you, so that you are lighter than air enabling you to superjump when you are near it. We do lots of things in the environment that give you new gameplay experiences, because we believe in having variety.

We have 2 basic premises that drive the game. Number one, you have got to have fun right when you get in. From combat to lots of variety in attacks you fight, with monsters you meet, with the environments you are in, with the gameplay you have. That is going to take you all the way up to levelcap. At Level cap it is all the elder game. The team is moving from building up the leveling game to the elder game, making it unique, cool and fun. We have a lot of announcements coming up about that.

Jeremy sums up a level 7 „semi tough“ monster, probably comparable to a wow elite monster. This guy eats Loftite and there is a whole bunch of attacks he can do. They can breathe poison gas in a cloud and the battle field in that area starts to deal damage to you. It will become harder and harder to dodge their other attacks. They burrow into the ground and start to send crystals out of the ground that kind of target where you are moving to and it gets harder to dodge in the area.

We like skill in combat. We want it simple enough for players to get it, but for us it is all about gamers and want to make it a challenge for you. We like variety. It is not like „cigarette combat“, where you can sit back in your chair and smoke a cigarette and play with 1 hand. we like to have you engage in combat, where your skill as player is involved.

Let’s talk about interactive environments. Pretty much every area in the game has stuff that is different. This blue crystal here is Loftite, you go near and become lighter than air. Now you can superjump! In other areas it might be superspeed or poison damage that you might learn to use against monsters. Every area has these things buried in the environment. There is a minefield here and if you are smart you can use the minefield to attack creatures. You can scare or lure monsters into it. If you are not so smart you can step on them and blow yourself up. Lots of areas have things that, if you are a good player, you can use to your advantage, or hurt you a bunch if you are not.

The whole world is built around flight. You get flying mounts over time, epic flying mounts, we are going to cheat and fly a lot. We have around 70 hours of content in the game at the moment and we are going to try to blaze through as fast as we can to show it all off.

One of the key elements in the game are paths. It is different than race, different than class. It is about your play-style. Some players love to explore and find hidden areas in the game, others are about socializing. We get them social quests or let them build up quest hubs, new buildings to add to the environment. Soldiers who are about combat get to do more and more fighting. 20% of the content you do comes from your chosen path.

This character is an explorer and here is a little red arrow that leads up to a hidden spot on that hill. As you find the spot and put up your flag, a satellite dish can show you hints about other parts of the zone, kind of like a treasure map where you find one spot and it is leading you to the next.

Each Path has a number of different mission types. Explorers can unlock hidden paths at cliff-sides, to get to other areas other players can’t. There are underground caverns that you can crawl into, where you can move around the zone faster than anyone else, because this underground cavern system is some form of fast transport, for your friends as-well.

We kind of like to hide content in areas that you can reach using superjump or through hidden paths for example. Here is a complete subzone. If you hop over there, there is a spaceship that is crashing. Rescuing it will improve the nearby quest hub, giving more vendors to it. There aren’t any quests in reach of there, but the players that stumble on or discover it can go there.

We make the zones easy to navigate. You see things in the environment and you head towards them or your cell phones notifies you of new infos, quests or missions. While sometimes there are NPCs with exclamation marks over their head, we really want you to have the world full of stuff to do. Here is a whole crew of monsters, that you can fight all together if you are a skilled player and gain a bunch of bonuses. There are double kills, triple kills, but it also gets harder since there are more patterns you need to dodge and it is trickier to line the monsters up to do the most damage at the right time. Skilled players get xp bonuses or buffs for fighting fast and efficient.

The world is full of content everywhere. We call it layered content, where different systems that pile on top of each other. Some of them are dynamic and they change, while others are static, so they are always there. The goal is to make it feel like there is always variety. Moment at moment it looks different, the gameplay is different in each area and that even applies to crafting.

If you are a miner for example, you see a rock in the world you can attack it and little pieces of ore fly of. Randomly sometimes it turns out they are the back of a monster and it buckles, runs away and you chase after it to grab all the loot of it. There is a 1% chance that a giant boss will bore up out of the ground, where it turns out you pissed of the giant boss instead of banging on a rock to get a little gold, and this guy pops up for a tough fight.
We do this for a couple of reasons. As variety for the player, a brand new fight you are doing and weren’t expecting, it is summoning little monsters to attack you, pieces of ore fly off and you get to collect a lot of rocks while you do it.
Beyond that it makes it hard for people to just go through it, you know … click on their mining icon and a little bar goes up. We want more than that. We want the possibility for an adventure to start at any time.
Also makes it tougher for people to bot it. You see those guys running around and mining everything? It is very hard to make a bot that can kill giant boss monsters that pop out of the ground. It is fun for you as player, as you get better rewards to fight this kind of stuff. Next milestone may enable you to jump in its mouth and run around in its stomach to get even more ore, but we haven’t tied that in, yet.

Each area has big stuff going on and we try to make that as interactive as possible. In the area ahead there is a strip mine and they dug up something they did not expect, a giant robot. We do these kind of things, to pull you in from a distance and then showing you an unique gameplay that might be going on in an area and make them interactive as-well. In this case (the giant robot), you can make a cannon and damage him, but he also gets annoyed and will shoot out laser beams that damage the environment, that damage monsters and also damage you.
It is not only about pretty things, but ones that actually change the gameplay in the area you are in. He is not a demo PC, he is actually part of the content, when he gets annoyed he blasts the environment and everything with it. You will start to predict where he shoots and lure monsters into it and have him actually help you out. He is a raid monster, you end up fighting him at level 60. In this area right now he is level 10. This will be a payoff for solo players where we introduce these monsters early in the game and build on it and build on it and build on it.

If you have any others let me know below!