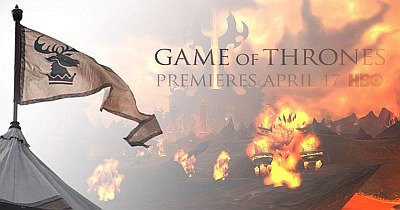 The recent lack of news postings isn’t due to slacking. There is simply not much to say about the state of Enhancement Shamans these days. During PTR already I posted about the Fire Nova changes, which are so awkward to use, and no other changes affect us, yet.

The lack of new content is kind of disturbing. Do you recall any other expansion, or even vanilla that had 6 month into it no new content? Even Wrath of the Lich King, which many players complained as coming too late, released Ulduar sooner.
Now all we get are jsut old, warmed up instances, someof us have been running since 2005. While you can see that they put some effort into Zul’Gurub, Zul’aman seems to be pretty much the same, tuned down for 5 man of course, as during the Burning Crusade.
This seems to be a bit meager to keep us motivated to play, especially with at least 2 months of PTR and summer standing between us and new content.

Blizzard started last week to reveal bits of information about the upcoming Firelands raid. The intention seems to not give out too much at once, after all they need to keep us interested for the at least 2 months, the time new raid tiers spent at PTR.

This makes you wonder if they really plan to release Firelands mid july or if they plan to delay it even a bit further to keep you playing WoW while SWTOR, Star Wars: The Old Republic is getting ready for release.

We already payed the cataclysm expansion and a good 78 euro monthly fees since november and haven’t got naything but delayed bug fixes, rewarmed old content and a game in an horrible unbalanced state.

All this greed for our money is slowly getting a bit overhand. Just look at the Blizzcon Tickets – the price was raised from 100$ (2005) to 175$ (2011). Also look at all these new premium services. Mobile Auction House, mobile Guild Chat … Anarchy Online had these for free a good 10 years ago.

Last years survey had a question „Would you pay for an 11th char slot?“ and then added arrows/scrollbars to the character selection screen during cataclysm beta.

At least I slowly feel like I am becoming milked a bit too much this way.

The QA since cataclysm just seems horrible. So many numbers have been off the expected values by more than just a little bit. For example the fix to Guild Cauldrons, which was tuned down from 25000 Flasks to 3000, which is only 12% of the original value, or 833% off if you prefer to look it at the other way. This kind of bad assumptions and sloppy foresight can be found throughout the game curently.

With a game as complex as WoW you need to get the DEVs some credit, I guess. No QA can foresee total unrelated issues or test everything. When I was game master in 2006 a new patch broke „the battle of darrowshire“, but this was ok, since it wasn’t related in any way to the changes that came (think it was the Ahn’Qiraj Patch).
But how can it be possible in current content major issues are simply slipped by. It took them a while to realize that on soem encounters adds (e.g. Maloriak) had the same hitpoints and that the incoming damage (e.g. Valiona & Theralion) was the same on 10 and 25 man. It was even design goal to perfectly balance 10 and 25 man raids, but turned out to be sloppy implemented.

How can there be so many bugs in Zul’Gurub, Zul’Aman, a freshly developped instance … I mean normal mobs drop epics and get farmed. This was an issue in ICC-heroics aswell, how hard can it be to predict people would actually try to farm them? Also the bug that the Zandalarian BoE items could not be mailed and other Bugs related to Zandalarian instances that required a hotfixed. This kind of bugs should simply not happen.

If you look at the WoL Logs it makes you wonder if they haven’t realized 6 months into the Expansion that bringing a Moonkin or Shadow Priest counts 1.5-1.8 players worth per raid slot and is a bit unfair towards the other classes. But these fixes take forever to adjust.

So many things are out of whack right now – I am not even talking about PvP.

How does it look on your realm currently?

things aren’t running too well for Borked on Ravencrest at the moment. People quitting the game, leaving to greener pastures and other guilds massrecruiting our people. Even top guilds report that they can fill their current roster only by mass recruiting people faster than they can quit 😀
I think that the above mentioned reasons eventually lead to this.

It does not seem to be an issue related only to Borked though, generally I see many people quit left and right. This is quite unusual, since the summer wave of quitters hasn’t even come yet. Of course I do not have the numbers to back these things up, it is just a matter of subjective observation. For example 2 months ago it took 72 hours before a ticket was answered, and now it is down to 1-2 hours. There are manifold reasons for this but not all can be explained by fixed bugs, lack of game mechanic changes (which raise a lot of questions), but not all of it. Also I doubt that mid expansion, especially before summer blizzard employed a ton of staff to battle the queue 😀

Wouldn’t it be nice if WoW got a real rival, that would drag a few million players away? I guess this is the only way that would motivate blizzard and beloved Mr Bobbby Kotic (read this link if you do not know who he is) to actually improve the things that are going wrong. Unless … they just let WoW run as it is and focus on their new project already.

What to do meanwhile

If you like TV-Series you might like to want to take a look at Game of Thrones, which is a new series, launched 3 weeks ago on HBO.

„Game of Thrones“ is an HBO adaptation of George R.R. Martin’s epic fantasy novel series „A Song of Ice and Fire“. The show explores a medieval-like world with its plethora of characters all struggling in the only game that matters — the game of thrones

If you are interested in joining Borked and help us get back to proper raiding for the next tier you can apply here. Good Luck 🙂

Eine Antwort auf „Not much to post these days“