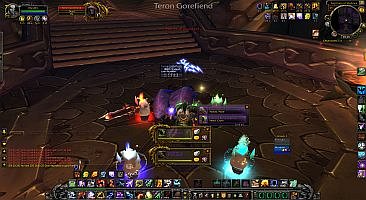 On of the best models and fun raid encounters in World of warcraft was Teron Gorefiend in Black Temple. The fight mechanics with killing of players and turning them into ghosts still is a pretty unique gimmick. Many guilds used this fight to compete on DPS during the burning crusade when wwscoreboard was still live.
I have always enjoyed this fight, but wasn’t sure if I could do it, due to the gimmick mechanics … and there was the fear about the thrash guarding Teron 😀 But you never know how things turn out if you don’t at least try!

Shadow of Death cannot be cast on a tank, isn’t that great? This simplifies the fight a lot 😀 Also the remaining mechanics like Doom Blossoms seem to be pretty much trivialized with a Resistance Elixir and Drums of Forgotten Kings.
The only thing you need to pay attention to, is Teron gorefiend’s hard hits. He will still hit you relatively hard, I’d say between 7-10k per hit. You will have to plays a bit more defensivel than reckless and save your Maelstrom Weapon procs to keep your health up. If you get below 50% pop your wolves or shamanistic rage.

Here is my first solo kill