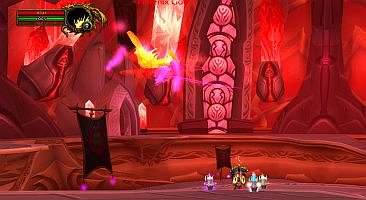 Phew Aa’ar … did not really expect this to be soloable. The fight has a few components that make it a bit tricky 😀 For one Al’ar is completely immune to fire … flame shock, searing totem, flame tongue weapon, lava lash … that is a big chunk of lost dps. But it is still doable as solo enhancement shaman. Here is how I did it!

Al’ar is the first boss in Tempest Keep, Netherstorm, Outlands. In Burning Crusade (Level 70), it was a 25 man raid encounter. Immune to fire and exploding adds, armor debuff and aoe fire damage (inclusive +fire damage taken debuff) make this fight way more challenging than it may seem at first glance.

You basically start on the left upper platform (the whole room needs to be cleared). Al’ar will come down to you and you can dps him, I used a pvp spec with „Frozen Power“ and Frost Shocks and Frostbrand Weapon. Everything related to fire are lost gcd’s 😀

Then at some point Al’ar will leave the platform and move to the next. Use Ghostwolf to get theare as soon as possible since he will cast flame buffet with noone in melee range. The spawning phoenix will follow you there and you should kill it as soon as possible on that platform. Place yourself that the 25 yard knockback on the phoenix‘ death will not knock you down.

Once in a while Al’ar will fly to the middle and bomb the uppare area, you need to get downa nd move to the first platform as soon as possible and meet Al’ar there.

Phase 2 is fairly simple. Just kill adds and do not stand in fire. Melt Armor will make you take a lot more damage. You can have wolves or earth elemental taunt the boss just in time so they will get the debuff or jsut careface it and put some more effor tin self healing 😀