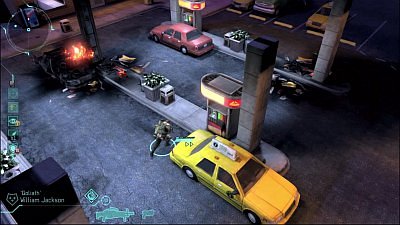 2k Games published a new video of the upcoming remake of the original „XCOM: Enemy Unknown Game“ by Firaxis. They aim to polish the game up to a modern standard while still staying true to the original game.

What I loved about the original XCOM-game was this incredible creepy and scary atmosphere. At the start you have no idea what is going on and Aliens will be a lot stronger than your forces. You were not able to fight all their attacks back and had to stand watching as they kidnapped humans for their experiments.
It was the genre-mix that made the game popular to me. You had to fight aliens to be able to get clues or even salvage alien items. You had to build your base properly to be able to research these items and eventually built some to improve your team or sell them to gain some money, which could be used to hire more personnel or improve your base.

If you are now hit by severe nostalgia or can’t wait at all for this release I suggest you take a look at this open-source version of the original game here. This should cover the time until you can play the new shiny version from 2k Games.

It seems that 2K Games will aim to preserve the spirit of the original game. Turn based combat, cover system, etc. Here is a bit of info from the original site:

XCOM: Enemy Unknown will place you in control of a secret paramilitary organization called XCOM. As the XCOM commander, you will defend against a terrifying global alien invasion by managing resources, advancing technologies, and overseeing combat strategies and individual unit tactics.

The original X-COM is widely regarded as one of the best games ever made and has now been re-imagined by the strategy experts at Firaxis Games. XCOM: Enemy Unknown will expand on that legacy with an entirely new invasion story, enemies and technologies to fight aliens and defend Earth. You will control the fate of the human race through researching alien technologies, creating and managing a fully operational base, planning combat missions and controlling soldier movement in battle.

Go behind-the-scenes with the Firaxis team as they discuss XCOM: Enemy Unknown.