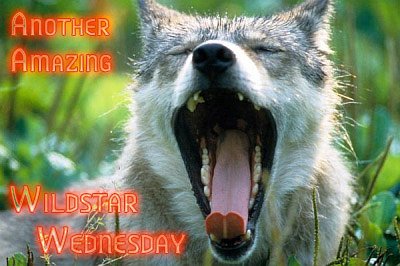 If you followed my site you will realize that I stopped posting information about Wildstar during the past months. Don’t get me wrong, I anticipate the game and have high hopes (you can read the posts here) but the information policy and the community managers are driving me nuts.

WTF am I doing here?

This exact phrase has been rushing through my mind while writing last post about Wildstar Wednesday. It was the one about the music composition. This would have been a perfect example to not only introduce the artist, but to show off some audio excerpts and create some atmosphere. Instead the whole Wildstar Wednesday was 99% wall of text and 1% music, nothing to soften it up …

Carbine does not miss a chance to mention Wildstar’s unique art style and it makes me wonder why they don’t make more use of it. They must have tools like the WoW’s Modelviewer – which allows fast screencaps of ingame 3d object/characters/gear – to illustrate posts, maybe even something we haven’t seen before.

At this moment I came to realize that I was simply quoting stuff, stuff I found boring and useless, uninteresting – stuff I did not want to read about myself and decided to stop to writing about Wildstar until they start posting some real infos.

To me Metal Maw is the perfect example that Carbine has real talented staff. The results from gamecom Metal Maw life drawing event was a bit disappointing at first. They did not create a monster, they created a fat chicken. But what the art team made of it is truly impressive. The fat chicken turned into a truly unqiue, fierce monster.

But what are 3-4 good posts over the last half year? It is too little and gives the impression that Carbine posts because it is Wildstar Wednesday and not because they have something interesting to share.

„They could make a flythrough video of some of their zones even without any mobs, make it last 20 seconds and it’ll be far more interesting than all the wilstar wednesdays together“ – Source IRC 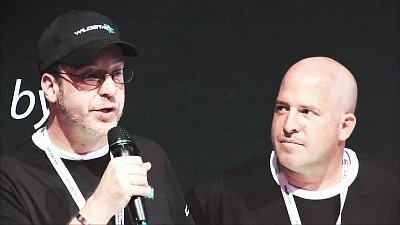 Carbine Studio’s credo is „We don’t talk about it if we cannot show it.“ While I agree and respect this I must say there is a difference between answering player’s questions without revealing details and saying „sorry dude, we have nothing to tell you, but check our website for future updates“, especially on a live Q&A session.

I have seen many many many press conferences, announcements and interviews. There were always questions about content that isn’t ready for public discussion, but they always find a way to at least talk generally about things. It seems that only Jeremy Gaffneys has these skills, his interviews were always at high level and interesting to see and read.

It was kind of interesting to see how the first Q&A session influenced the crowd, after the third question was answered with „Sorry we don’t talk about this“, the crowd perceptibly lost interest in asking more questions. It took T-Shirts and other goody rewards to encourage more questions. Some forms of „we can’t talk about it“ sounded a bit harsh and nothing I’d expect from people who want to get positive attention to their games.

Yeah, I tried to introduce this portal to Jeremy Gaffneys, Robert Land, Loic Claveau and Troy Hewitt. Troy Hewitt even replied „Hi Michael! I’ve just gotten back to the world after a week-long rest, and I noticed your message upon getting home. Can you send me a note to […] ? Looking forward to talking with you this week!“ this was on september 7th and I am still waiting for the reply to my mail.

To be honest I find it disturbing if Community Managers don’t get in touch with you. I recall Atreid using tweeting this: „I am Atreid, and I send this message to any #WildStar fansites who took refuge among the stars. Send me a contact email; we need to talk! [:)]“ 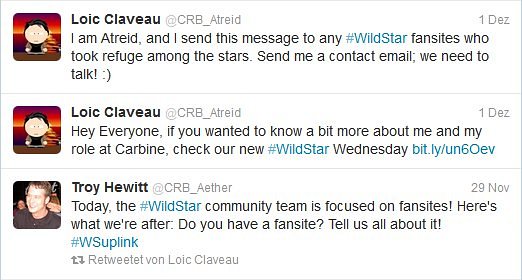 Since December 1st I am waiting for a reply to this.

Sure, this isn’t the biggest site, this portal has only 2500-4500 visitors a day (more at the week end), but I’d at least expect a friendly „we are interested in other sites for now“, especially when they ask to get in contact with you. Isn’t that what communita managers do?

In fact, even though the name was leaked (pcgames.de) I decide to hold this back till after Jeremy Gaffney’s announcement. With no access to any material and no NDA I could have done so, instead I even delayed comments on the subject. Next to the superb Wildstar Central (you guys are truly amazing!) there was only my site back then with some (general) information.

During gamescom Robert „Robeardo“ Land announced the mount from the trailer was already ingame and I jested via Twitter:

and got the reply

Needless to say that I am still waiting for this, further questions/reminders remained unanswered.

Don’t get me wrong. The game looks very interesting and I have a big interest in it, want it to be a success and help where I can. At the moment I do not agree with their information policy and I am actually happy that carbine never bothered to contact me. I’d feel obliged to share even the most boring stuff. I have understood that they don’t really want the contact, but I sense huge potential in this game. Would love to promote Wildstar, post some artwork, screenshots, videos, post about lore, the wildstar universe, races, classes, player paths or the layer system, but I can’t due to lack of resources.

This is from our IRC (not from the inofficial Wildstar IRC), but without that Chat it would be just another MMO for me and I’d probably not even read about the game. Over the past half year the tone changed from interested to disappointed though. It is not representative, but maybe it is something to think about.

bbbb: nah, but they did say Q&A at the end of january, and they are sending stuff to fansites on friday, right?
bbbb: Not that its a gaurantee for anything good, but at least SOMETHING will happen (probably equally as disappointing as their wildstar wednesday lol!!)
cccc: I bet if you had written „equally exciting“ everyone would ahve known what you meant …. everyone but carbine 😀

dddd: Yeah, honestly, the wildstar PR is a disaster to be polite
dddd: Just compare the GW2 showing at Gamescom 2010 (when they first showed it to the public) and Wildstar at Gamescom 2011, games at that time had been in production roughly for the same amount of time
dddd: Wildstar was able to show off their starting zone with hardly any classes, game systems, paths or anything else of interest really and the demonstration was very short and bad 😀
dddd: Not to mention in the months after Gamescom, wildstar have showed absolutely nothing new
dddd: And the stuff they keep talking about or showing is incredible lame
dddd: It honestly gives off the vibe that they dont have ANYTHING completed, besides their starting zone and the game is looking at a 2014/2015 release
eeee: I mean, it’s a massive difference in information revealed, and the real issue here is that Wildstar keeps giving the impression that they just DONT have more to show than what we saw at Gamescom

ffff: Our #WildStar Community #Uplink tomorrow on FB will ask you a very important question: What do you want to see more of? http://ow.ly/8DJcs
ffff: should i tell them, „if you have no clue then you have the wrong job mate!“

gggg: A new WildStar Column is up! Today’s theme is: „What is an Art-Style?“ Check it out and give your opinion :)…
gggg: yawn, it is as interesting as it sounds
hhhh: wildstar keeps impressing with their articles! 😀

iiii: Tomorrow is going to be a great day
iiii: Looking forward to wildstar wednesday!
jjjj: hahahaahha, I thought for a second you were serious
iiii: hahaha 😀

kkkk: I have a very long post ready for that, but it sounds too much like a loooooong complaint, so I never published it 😀
llll: haha, there’s no reason to go crazy
llll: but really, the current system they use for WW just seems retarded
llll: I was more interested in the game based on the developer interviews and concept arts shown before the game was showcased at gamescom
llll: The current PR stuff is really retarded, it doesn’t take much to make people feel some interest in the game
llll: Show off different zones, either concept art or ingame shots, then add in some music that fits the zones instead of writing articles about how difficult it is to make the music for their zones
llll: Make a short video showing off some different skills in combat situations (like blizzard did with D3)
llll: Maybe take a look at ArenaNets blog articles they’ve released during the games development
llll: They’ve not only been very long and detailed, but also included screenshots, concept art and at times videos
llll: ArenaNet had skill videos for warriors and 1 more class back in 2008 or whenever
llll: I remember first hearing about GW2 when that rogue from premonition linked a skill video
llll: I can’t understand how a game have been in development for soon 5 years and all we’ve seen is a few minutes of the starting zone and a cinematic trailer made by ANOTHER STUDIO
llll: Really gives you a strong impression that there really is no product

Seems like Carbine was trying to get in touch, but there was an error with my email adress. This means I was waiting for their mail and while they were waiting for my replies. Thanks at the Carbine Team for clearing it up!

6 Antworten auf „Where are the real Wildstar updates?“