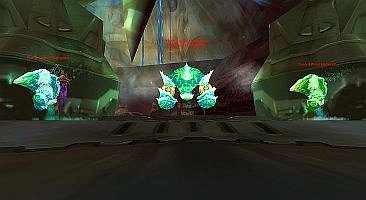 Hydross the Unstable is the first boss in Serpent Shrine Caverns, Zangar Marsh, Outlands. My quest to solo raid encounters brought me to SSC last week already to kill „The Lurker Below“. I hesitated a bit to try other bosses since they seem to have mechanics that make these fights somewhat tricky.
Hydross seemed the easiest, but it turned out I underestimated the fight a tiny bit 😀

Hydross the Unstable <Duke of Currents>

Hydross has 2 forms that he switches to, depending on where you fight him. Due to the nature fo the fight you need to switch the places once the Mark of Hydross stacks too high. Doing so will spawn 4 adds doing full nature/frost damage and turning immune to this form of damage.

On my first try I just tried to zerg him down in frost form, but he started hitting for 8-9k pretty fast 😀 got him down to 30% but then the damage was jsut too high to compensate. The second approach was a bit more careful , using wolves / elementals / rage for transitions and switch when the mark reaches 50% extra damage. Then it was pretty easy, switched to poison and then back to frost before killing him.

Fortunately Water Tomb will not be cast when soloing the boss, which makes this a whole lot easier.

Here is a video of my second kill. As you can see I use feral spirit to help through transitions, and keep the nature phase as short as possible, due to his imunity tonature damage. For Second frost phase I just used heroism to bring him down.