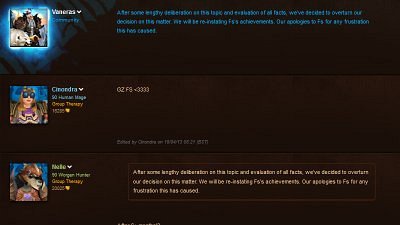 Blizzard has just reverted their account action versus Fs. He was the world first to reach level 90 in 4 hours time, by killing off Mistweaver Shamans. Fs always claimed he used no exploit, did not act versus the rules of conduct, but Blizzard took aways his achievement and set him to level 87.

Just imagine, you know you haven’t done anything wrong, but can’t do anything about it. For 6 months Fs has been put off with excuses and decisions have been delayed and delayed and delayed. It is one reason why I dislike Blizzard support. There is no instance you can reach when you are not satisfied. Sure there is wowconcerns email-address, but they always back up their Gamemasters.

Anyway it came as huge surprise when Blizzard decided to give back Fs his Level, Achievements. I’d still be majorly upset at Blizzard but at least it is a first step to the right direction and more than I expected. But read it yourself:

„After some lengthy deliberation on this topic and evaluation of all facts, we’ve decided to overturn our decision on this matter. We will be re-instating Fs’s achievements. Our apologies to Fs for any frustration this has caused.“ ~ by Vaneras

When I read the comments like „David vs Goliath, David has won!“ I can’t feel the „win“. Is it really a victory when you are stripped of your achievements and level, and your integrity drives you to stop playing your favorite game. He only got back what Blizzard took away in an act of over-hasted decisions without knowing all the facts. People often forget that Fs isn’t just a player, he is the damn best player I had the honor to play with.