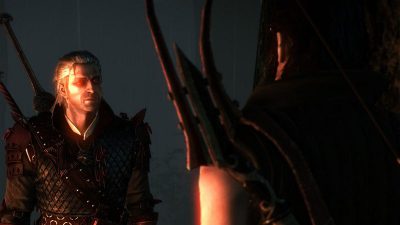 There are a couple of quests that require you to talk to Cedric, an Elf living in Lobinden, the Slums outside Flotsam. It seems that people ahve a hrd time finding him.

You can usually find him on top of the outlook, right outside the east exit of Flotsam. Occasionally he may move to his hut or even sit with other NPC’s around the campfire outside his Hut.

I made this graphic for a german forum a while back.

For reasons that were not entirely clear, this wise and experienced elf had chosen to live among humans. He worked for the people of Flotsam as a lookout and trapper, and none had a better knowledge of the surrounding forests. Whether it was the local plants and wildlife or the dangers that lurked amidst the trees, Cedric was the local inhabitants‘ chief and often only source of information.

Heroism sometimes exacts the highest price. When Triss‘ life was in danger, the elf did not hesitate to defend her and was wounded – mortally, as it turned out. Thus Cedric died, though his sacrifice was not in vain.