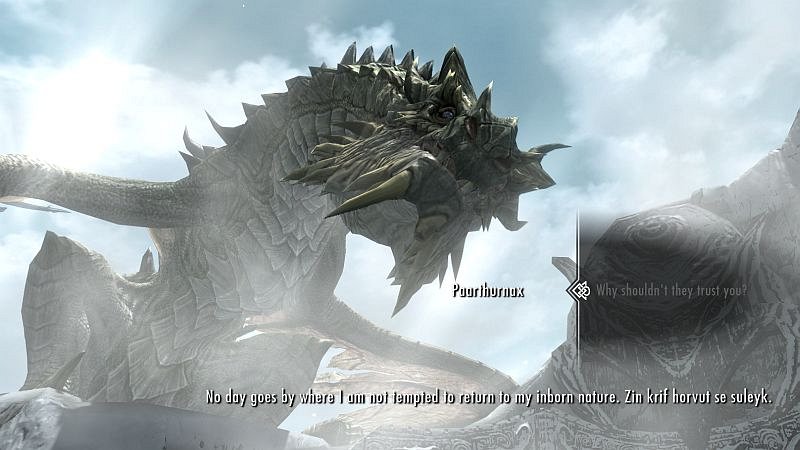 If you haven’t finished Skyrim, yet don’t read on. All others have, with the help of the greybeards, arranged a peace treaty between the Empire and the Stormcloaks. At the end of the summit you are approached by Esbern and Delphine who tell you that the Dragon Paarthurnax needs to die for his past crimes or they will no longer cooperate with you.

For me this is the hardest decision so far. Not because it has so much effect, which is doesn’t, but for the fact that I am supposed to kill an Ally someone who supported and helped so much.

During the Quest „Season Unending“, the arrangement of a temporary peace treaty, Delphine or Esbern approach you and tell you that they have learnt about Paarthurnax, the Dragon who is helping you and who happens to be the leader for the Greybeards.

As we have learnt throughout the main quest The Blades have been formed as Dragonslayers, serving the Dragonborn. Later, I suppose due to lack of dragons, they evolved into an order of spies and commandos in service of the Emperor of Tamriel but lost their role as protectors. By the time of Skyrim events Esbern and Delphine are all that is left of the order. They returned to their original goal and approach the Dragonborn offering guidance and support.

„There are those that say the Blades still exist around us, in hiding from the Thalmor. Waiting as they have done time and time again, for a Dragonborn to return. For one to protect, for one to guide them.“ – exceprt from ‚The Rise and Fall of the Blades‘

Gaining Reputation with The Blades you will (would – don’t even think about it!) eventually be able to have your followers join the order and take them to Dragonhunts.

During the events of Skyrim they help you understand about the Dragons and return of Alduin. They accompany you to Sky Haven Temple, The Blade’s old base, when they learn that the leader of the Greybeards is Paarthurnax, one of Alduin’s Chief Leitenants and Alduin’s Brother. They see him as responsible for many of their ancestor’s deaths and demand you to kill him. They refuse to cooperate any further with you before have completed this Task. 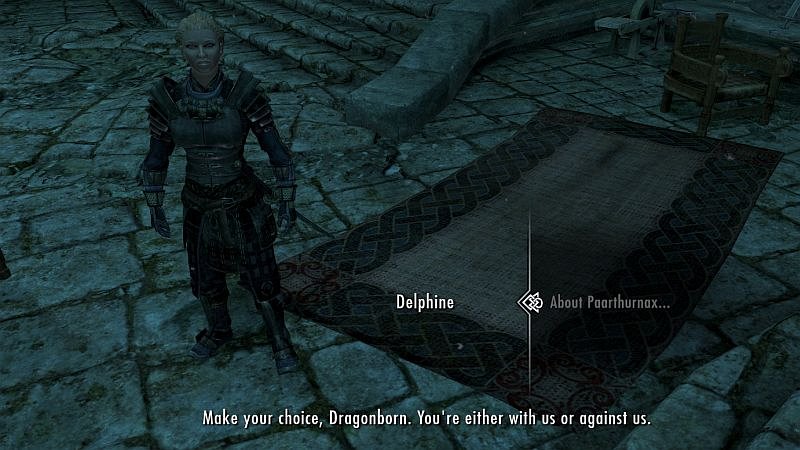 Esbern (got this when returning from Paarthurnax): 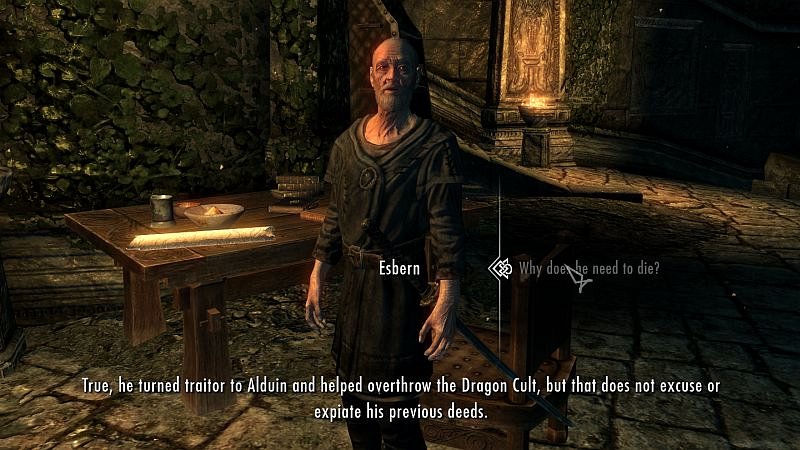 I really don’t get The Blades, they claim to be serving you and yet try to force you into killing the Dragon. The Dragon who has stood up against Alduin, a dragon who has been waiting for thousands of years for Alduin’s Return, the Dragon that convinced the Greybeards to teach you the shouts, he taught you shouts himself, guided your way to learn Dragonrend during the original fight versus Alduin – which would also force him on the ground. He helped you kill his brother … what better Ally could anyone think of? Don’t forget you are a Dov yourself, without wings, but a Dov.

There you are the most powerful person in Skyrim, you saved the whole world, have legendary fighting abilities you were able to stop the war for a bit with your legendary speech skills but you cannot talk your servants out of this crazy idea … NO WAY!

Paarthurnax is more reasonable and makes some good points.

The only solution for me is to kill Delphine and Esbern to ensure that this Dragon stays alive, THAT should be an option. I read a comment where someone said „I want to steal their soul and enchant an item with it!“, yeah that sounds like something. Kill Esbern, steal his soul and beat Delphine with it!

How do we do that? Well the console is our friend. Using help „Esbern“ 0 and help „Delphine“ 0 you can find the actor IDs then you use setessential to make them mortal. Then you can release these self-righteous, double standard asses from their oath by sending them to Sovngarde. I am quite certain that The Blades have their own load of black chapters in their history.