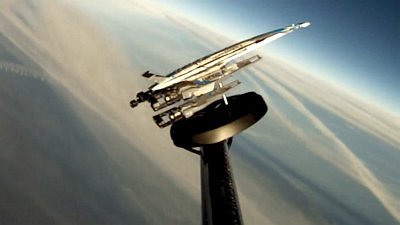 Bioware will launch copies of Mass Effect 3 Space Edition into the upper atmosphere from a few select locations. You can track these „on-of-a-kind fan prize packages“ (probably they meant to write „one-of-a-kind“) and try to be the first to get to their locations.

To celebrate Commander Shepard’s war to take Earth back, Mass Effect 3 will be the first console game launched into Earth’s upper atmosphere on a historic voyage. And you have a chance to take home a piece of that history.

Starting February 23rd, various cities across the globe will host their very own Space Edition launches. Starting with San Francisco, CA and ending in Berlin, Germany.

Track the packages on their flights and be the first to arrive at the landing zone to win an early copy of Mass Effect that has survived space travel. Each Space Edition also comes with an on-of-a-kind fan prize package. Other prizes will also be given out to runner-up participants (subject to availability).

Check back soon for rules and contest entry.