Finally we have Kil’Jaeden down. The beginning of summer, soccer championship, wwi and not at last the upcoming expansion Wrath of the Lich King thinned out our Guild roster a bit.

So we decided do raid with another Guild on Ravencrest that is in a similar situation and created a joint venture to get Kil’Jaeden down. It was a sunny saturday afternoon when we started to raid and I was prepared for some wiping and learning, but after numerous raiding days the past week, we got him down the second try. I was quite surprised as I hadn’t expected him to go down that fast. 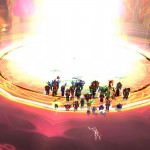 To round up the great kill, Kruf from Kwak Herders got the legendary Bow Thori’Dal, the Stars‘ Fury. 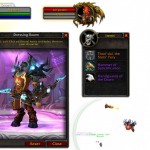